An Ode to Canning Jars

I use canning jars for everything. Pint jars, Quart Jars, Half-pints, small mouth, wide mouths. Even the teeny weeny 1/4 pint ones! And Salmon jars.

Homemade Ketchup, while yummy on meats, it does not replace ketchup, but is very good roasted or baked on meats! This is in a fancy half pint, knickname being ‘Jam Jar’. This has a strong allspice taste, as I accidently poured a leettle bit too much in!

I use jars for more than just canning. I like to keep baking supplies in jars so that I don’t have 5 gajillion different bags, often all clear bulk bags in my cupboard. This is Bran for muffins (Recipe yesterday!). Sometimes I’ll use actual canning lids, or just a square of parchment paper. I wrote on the top of the parchment paper what was in the jar. This here is in a Quart Jar.

We have this silly thing in my family. Blackberry Jam cannot be simply called that. It’s Slam Bam Black Berry Jam. Peach and Blackberry jam is Bumblebee jam. Get it? Black and Yellow? Blackcap raspberry Jam is Policemen’s Jam, because policeman wear black caps! The low sugar Policeman’s jam? Diabetic Policeman Jam! Let me introduce you to Marma Duke. Otherwise known as Seville Marmalade. This is in a fancy jam jar.

Unfortunately it didn’t quite set, but it was my first experience making a preserve without pectin! It’s still delicious and fine to put on toast.

Ahhh, Chicken Stock. How I love thee. I was canning venison stew meat (No pictures, I finally used it all up!) and had had space in my pressure canner. I had just made chicken stock and decided to look up in the pressure canner book if I could can it. Turns out I can! And for the same time and pressure as venison! It’s been a nice emergency to have on hand. Again, wide mouthed Quart jar.

I made about 50 pounds of them this year! 1/3 for my Mom and Stepdad (They were away in pickle season), 1/3 with my cousin teaching her how to make pickles, and the last 1/3 for ourselves. Of course it was while making my pickles that I ran out of dill! So I made some rosemary pickles, fennel pickles and curry pickles. I also make hot pepper and dill, which are Cowboy’s fave. I can pickles in Pint and Quart jars, and wide mouthed are waaay easier than a small mouthed for packing the cukes in!

For the first time, I canned peaches. I knew I didn’t want a bunch of quart jars, they just weren’t my style, instead, I did them in jam jars and salmon jars, which are both 1/2 pint, or 1 cup. This way, Cowboy, who loves canned peaches, could take them in his lunch. Too neat eh? 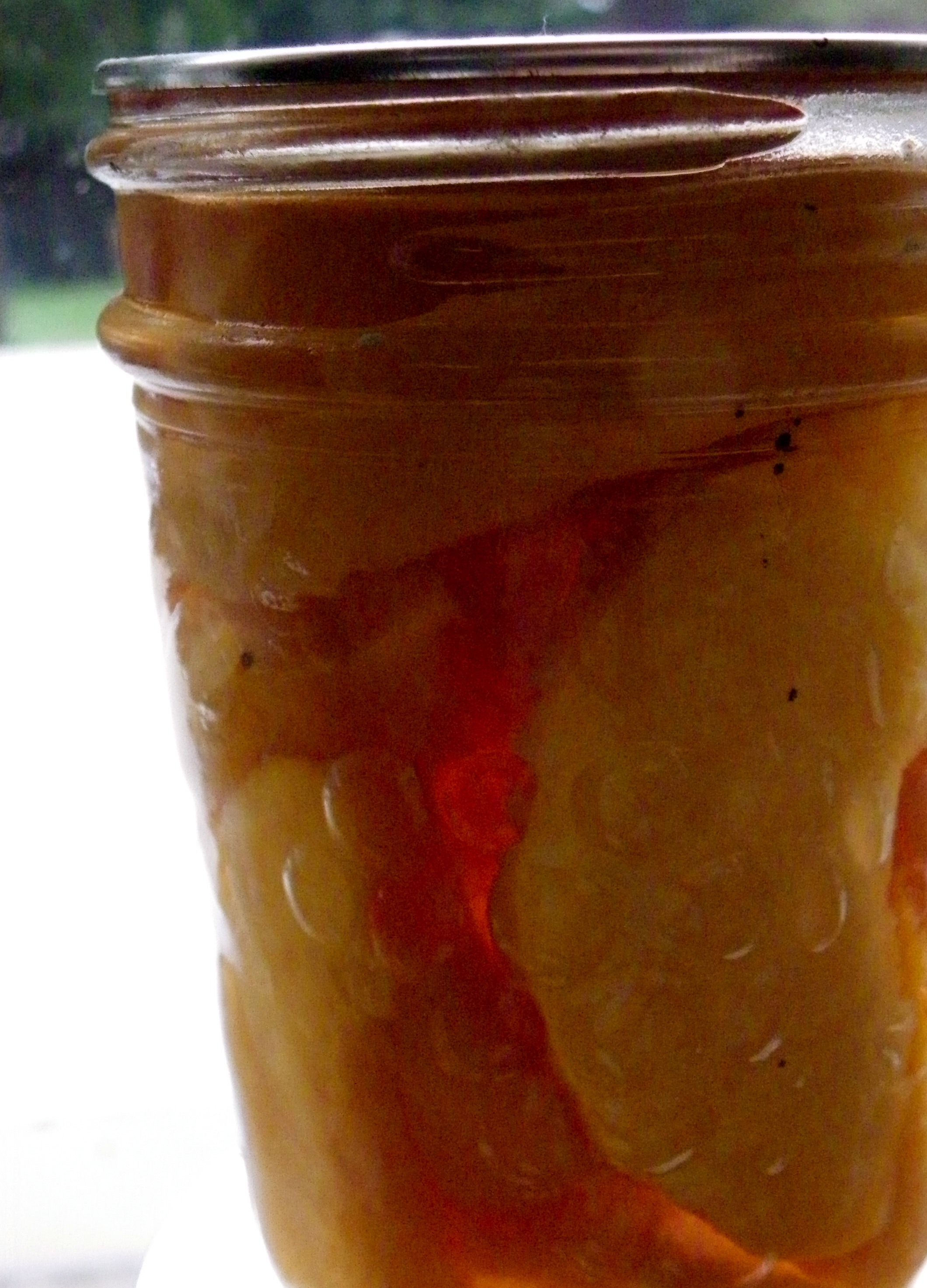 Instead of making a thick, white death sugar syrup, I was able to find a recipe for a light syrup that’s honey and water! The result is peaches that taste fresh and delicous.

I don’t know why I made pickled carrots. We don’t love them. I’d never even eaten them. It was a “Carrots are in abundance and cheap and so is vinegar and I have an afternoon free and I’m addicted to canning things” decision. I made a dozen jars, and we still have atleast 9. Any ideas what I should do with them? My Brother in Law eats them straight out of the jar. Come to think of it, so does my Drillerman, my other Brother in Law! Not us though… 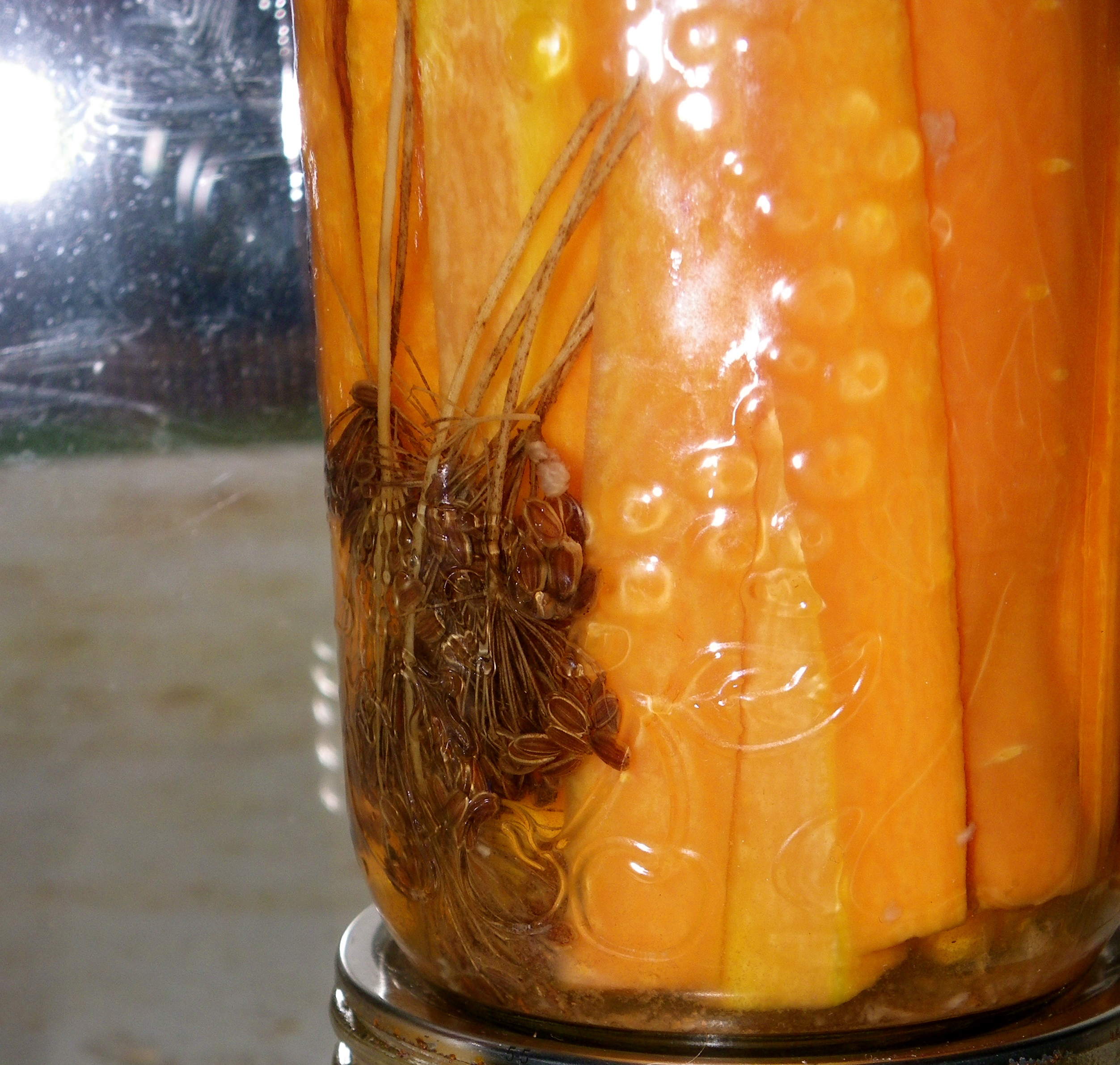 We make our own yogurt. We have a cow, so why not? We only get 2 gallons a day!! Quart jars are what it cultures in, and what we eat it from! I’ll post a recipe soon.

One of the other “It’s in abundance what shall i do?” thing I preserved was dried apples. Until my apple peeler corer slicer broke and I decided it was too much work otherwise. But I got a couple quart jars full! It was enough to grace our trail mixes for the winter, and that made me happy.

I find cooking supplies are good to keep in canning jars as well! Here is dried onions. For some reason, even though Cowboy hates onions, I can use green onions and dried onions in cooking! I’ve got them in a little jam/half pint jar

Nuts keep well in jars too! Get rid of all them darn bags from the bulk section

And I canned so many green beans! They get used a lot around here.

I could go on and on about different things I use canning jars for.

Do you use canning jars?

25 thoughts on “An Ode to Canning Jars”

You don’t have to do it all.