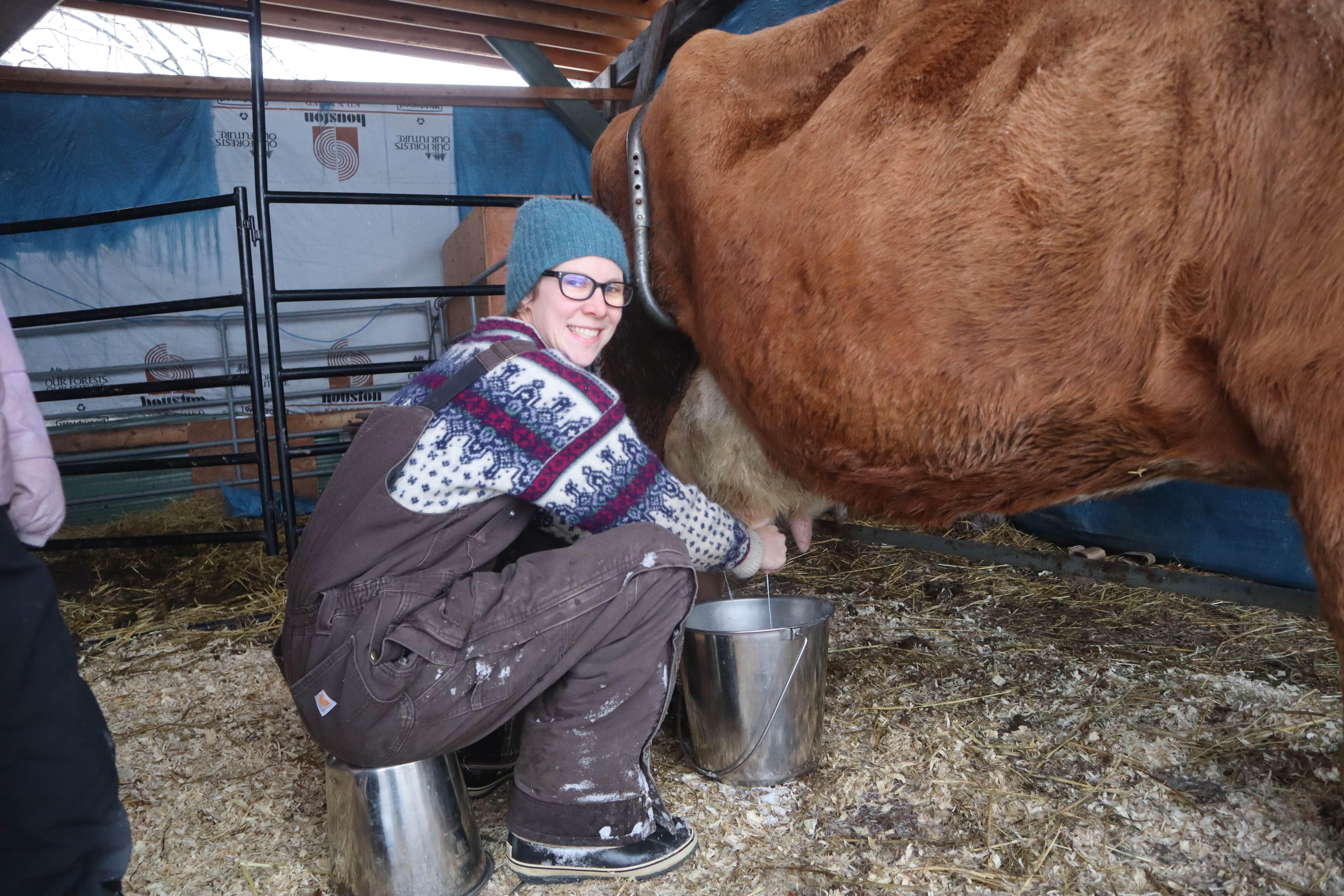 Wish I knew before milking cow

We jumped feet first into having a milking cow. I’m not even joking you there! Our first milking took two of us 45 minutes to get a gallon, because while the cow stood perfectly still and had a terrific udder for milking?

We had never milked a cow before.

Lets back up a week, to our friends who owned a milking cow calling us. Ben and his family were tired of milking a cow and being tied down to home after 14 month of milking. Their property was not fit for a cow as it was quite boggy, and they were thinking of moving. Others had offered to buy the cow, Affectionately known as Mr. Spoon, off of them but they wanted to GIVE her to us. While we’d never had a milking cow, Marius and I BOTH had raised bottle calves growing up, as well as many other small and large animals. We were no stranger around the barnyard and there was space for a cow at my Mom’s house, so we said “heck, why not.”.

Over five years and 3 cows later (We butchered Mr Spoon, Then ended up with two milking cows, but sold ones last fall) there are MANY things I wish I’d known before. Some aren’t written in books, and others, had we bothered to look, we could have found.

We had never even heard the term ‘raw milk’ when we got the cow. I was never much of a milk drinker and Marius grew up on raw milk, but they called it Farm milk! Across the board in Canada raw milk is illegal, but recently some exciting things have happened with raw milk cow shares in Ontario and one day maybe we’ll be dairy farmers.

2) You’ll have to learn to make cheese.

No brainer, you’d think? We milked for months before learning to make cheese, although the cow was at the end of her lactation and we got just a gallon a day. A gallon a day adds up really quick when you keep messing up yogurt, make gross butter (now I don’t get how we did that, as butter’s easy to make…but still…) and are scared to make cheese. Marius brought 2 litres of milk to work everyday and drank it there. Mom and I made french toast for breakfast every morning. I may have had a little junk in the trunk at the end of those couple months…

Ideally we wouldn’t feed any grain at all, but we do, albeit a minimal amount for the cows size. We didn’t feed organic for the first couple years, partly because it was more expensive, and partly because it was hard to get ahold of. Once we decided to make the jump and switch to organic feed? Well, not only have we never looked back but we’ve discovered many other things such as;

– GMO Corn in conventional grain can mess up a cows fertility. We experienced an infertile cow!

-While Organic feed used to cost 2x as much, we only had to feed half the amount! It was more nutrient dense, as well as the cow having to chew the whole grains instead of swallowing pelleted feed. Conventional feed has now gone up, and we’ve found a cheaper source for Organic feed through a wholesaler (we don’t have to buy bulk) and the difference is $13 for conventional and $20 for Organic now. So feeding organic saves us money!

-Unless stated as ‘Vegitarian’ feed on label, it could have animal byproducts in it. The Prairie Homestead talks more about it here.  Obviously I’m not a vegetarian, just look at the name of my blog, but euthanized cats and dogs in my cows food?! I’ll pass, thanks!

4) You can milk a cow from behind.

Please don’t take this as a rule, maybe our cows are an exception, but they often get to a point in their milking where they’re impatient and do what I call ‘Tap Dance’ and small ‘kicks’ or ‘foot swings’. They’re readjusting and it’s a pain shifting the bucket all the time, or they’re just lifting their leg forward then down to get you out of there. Never are they doing it to hurt us, just to get us out of there. Here’s the neat thing…if I stand on the cows right side (looking from behind go to the right), tuck her tail off to the side and milk her from behind holding a bucket, she doesn’t kick at all. She doesn’t care, she just doesn’t want that bucket between her legs anymore. If I notice the cow is a bit impatient one day, I’ll make sure I get the fronts milked out first, because she’ll stand much longer with me milking from behind.

5) Have a cream for blocked ducts on hand.

Dont be like me and wait until you need it NOW. If you have a cow, especially a freshened one, make this right now. When I notice one teat is squirting funny, if there are some clots in the milk strainer, or she’s sore when I touch that quarter, I slather it all over the teat and that quarter. I’ve never had it where there was clots in the strainer without knowing what quarter it came from, but if I did, I’d rub it on the whole thing. Make sure you get up into her ‘arm pits’ and just rub it in!

6) Realize that you’re going to talk about your cow, like she’s a person.

I spend a lot of one on one time with Wilderness and so does Marius. We find ourselves talking about her as if she was a person, another child of ours, referring to moods, character attributes and bad days. A couple friends are ‘relief milkers’ for us and my sister used to milk as well, and the same thing happens to them. It’s comical being at a party and saying “Will was a handful yesterday, she wouldn’t stop tap dancing” and a relief milker will nod and agree. An innocent bystander asks who Will is and then we realize we were talking about her like she was a person…whoops…

There’s a science to this one too! A couple years ago a Nurse friend told us they were advised to wash their hands with lukewarm water or colder. Why? Well for them, all that hot water of washing your hands frequently will dry and crack your skin, making way for bacteria to enter. The other reason, the one that went liiiightbuuuulb was that hot water opens your pores. When you open your pores, whatever is on your skin, goes into your skin. Hands smell like a cow and you run hot water over them? Oh guess what, you’re now going to smell like a cow for days. Hands smell like cow and you first scrub with soapy lukewarm water? Fresh and clean baby. My hands then get exposed to hot hot water later while I’m washing up the strainer and buckets, but if I make sure to at minimum, rinse them right away, I avoid smelling like a cow.

One thought on “Wish I knew before milking cow”