**On Wild Wild Wednesdays I’ll share with you a new recipe for how to use your wild meat whether it be venison, elk or moose! I’ll also add in other wild foraged foods to delight you! I might throw in the odd recipe for chicken, duck or goose that could be adapted to wild meat. If you don’t have wild meat, feel free to sub a similar cut of beef!**

Have you ever been mushroom hunting? Do you enjoy eating mushrooms and see mushrooms outside but wonder which ones won’t kill you? All good questions.

Four autumns ago we were sitting around our little cabin on the weekend, kind of bored. ‘Why don’t we go mushroom hunting?’ I asked Marius. He looked at me like a stunned bunny. You see, I’m yet to find a mushroom I enjoy eating! And foraging wild mushrooms? Isn’t that how people kill themselves?! ‘We’ll look up some varieties on the internet and go for a walk’ I suggested. No dice he answered. ‘How about we go to the book store and find a field guide…then go for a walk?!’ NOW I had his attention!

Next thing I knew we were in the car on the way to the bookstore! We talked to the owners of the small bookstore and settled for this book; All That the Rain Promises and More… (not an affiliate link) 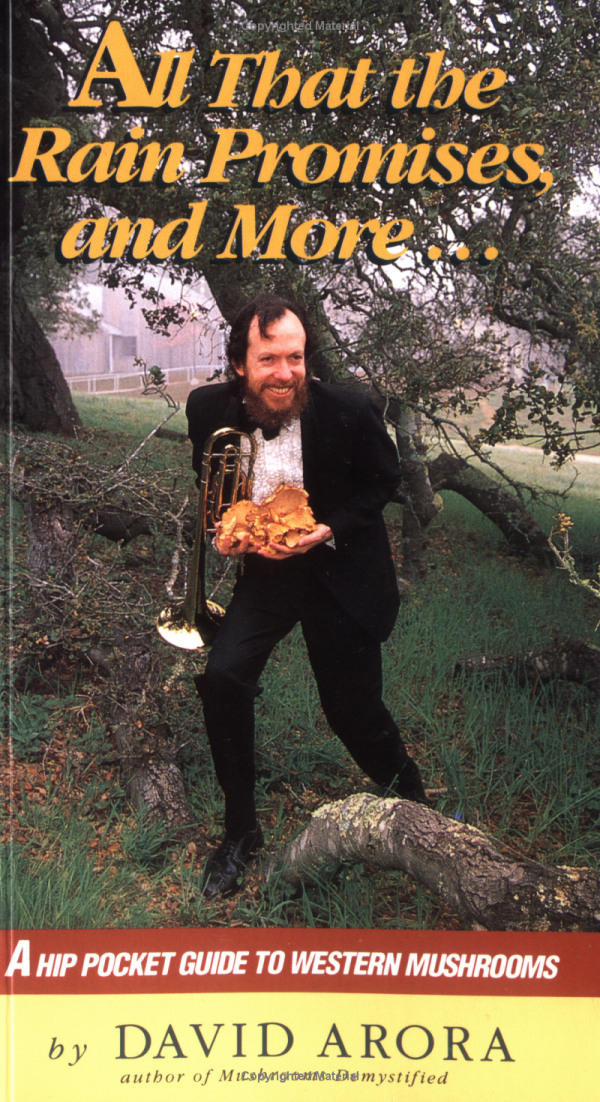 Yeah…he’s kinda creepy looking, but this book is where it’s at! It truly fits in your pocket! He has a much more expanded book my Mom has, called Mushrooms Demystified. Nice to have, but we’ve done all we do with just the pocket guide.

Our first time out we hiked around the woods at my Moms house, picking and identifying every mushroom we came across! Everyone that was edible we brought home to cook. We quickly learned that just because they’re edible, doesn’t mean that they’re that good to eat. Also noted, some of the varieties that are considered edible but not tasty, actually can be tasty!

The second year we decided to go off island to Cowichan and go hunting! So worth it! This was also the year that for his Christmas present Marius went on a mushroom walk course. I just found out that the guy wrote a book too! Find it here. 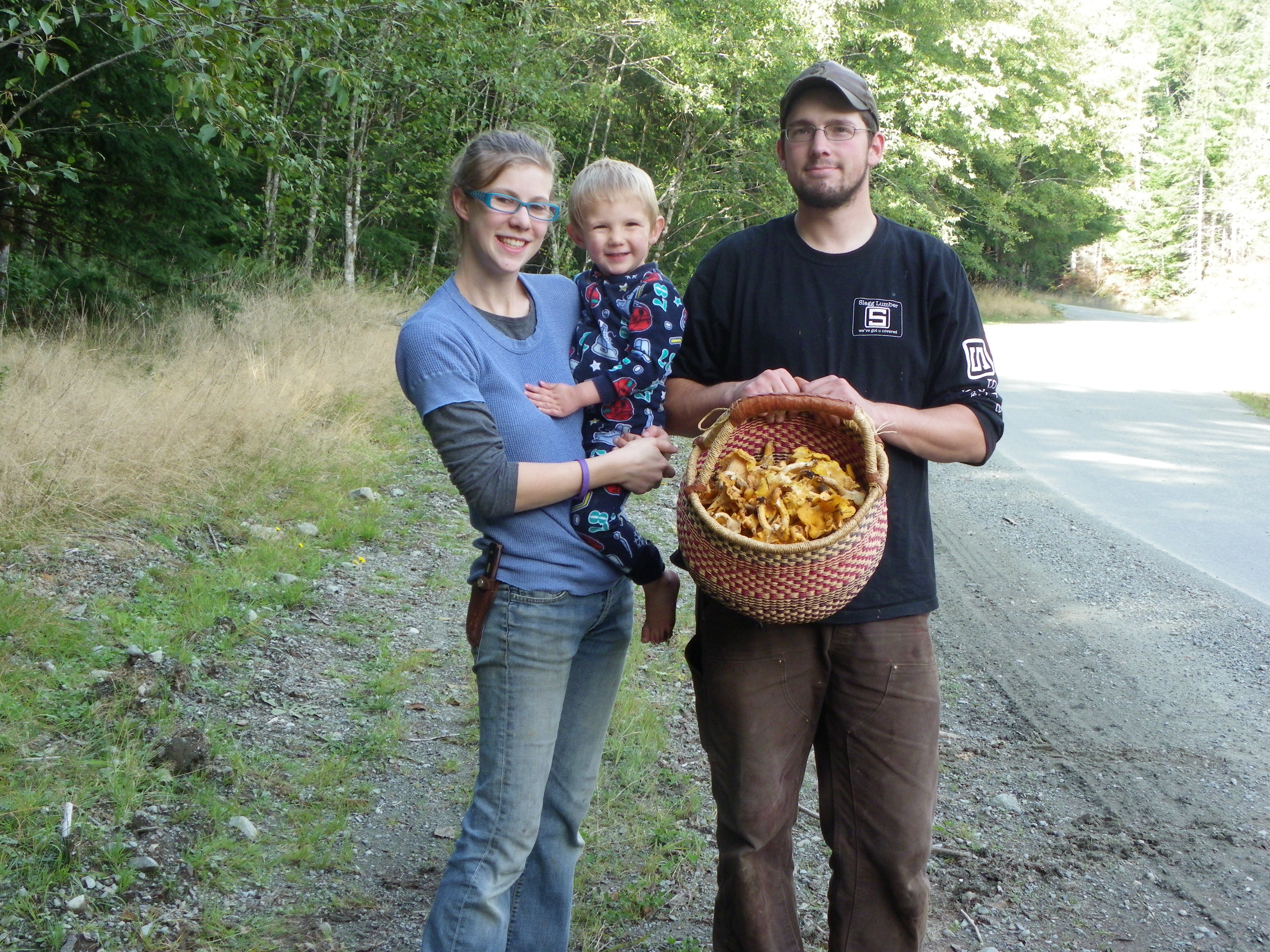 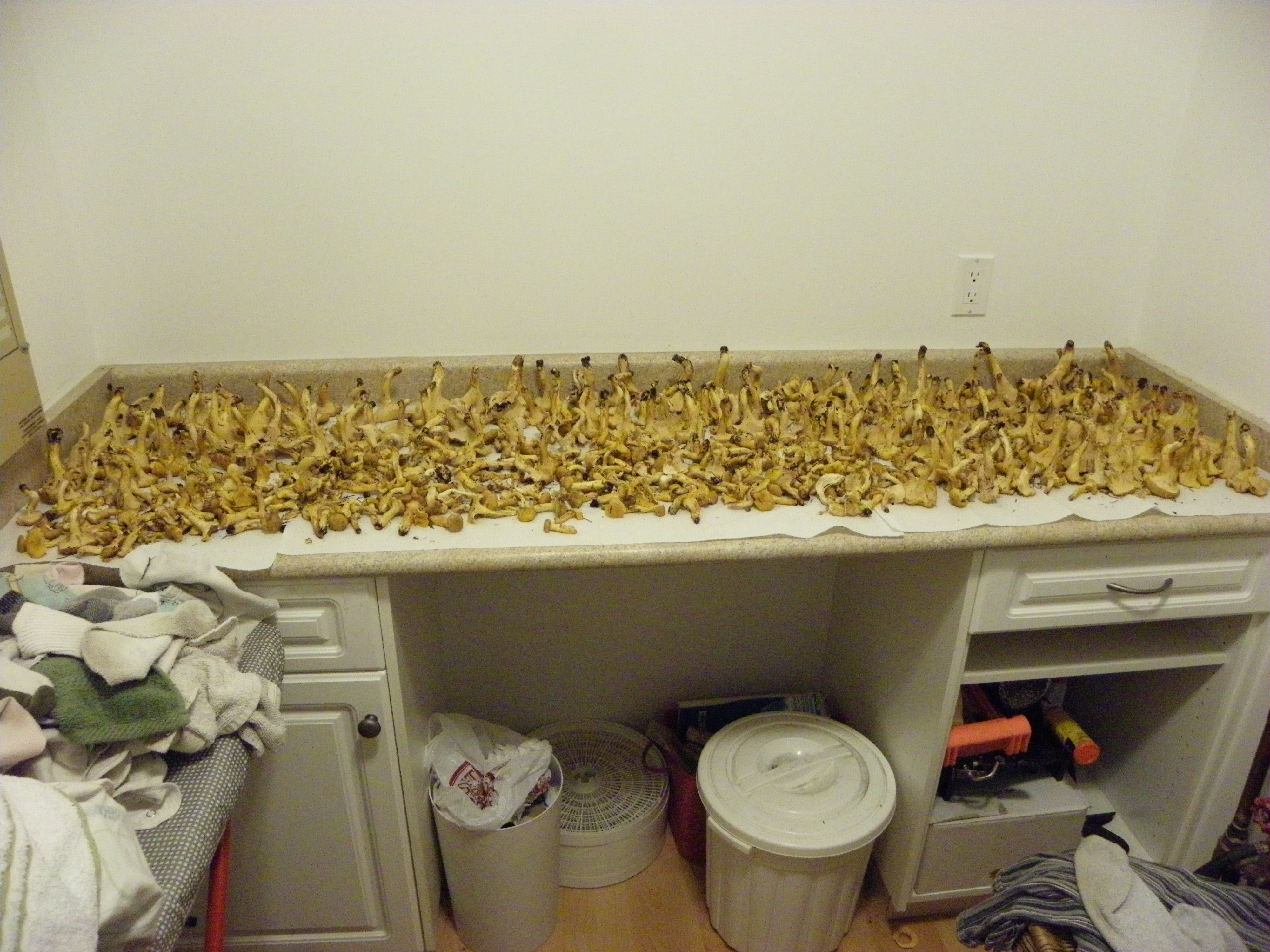 The next year was a bit of a bust for hunting because we couldn’t go off island and on island was a bad year. This year has been amazing on island, we haven’t even been off island and Marius has two gallons packed of dried chanterelle and lobster mushrooms!

When and where should I go?

For us on the west coast of Canada, fall is the big mushroom season. Old growth forest with mossy ground has done as well. Also! White chanterelle were plentiful in thick salal this year. It was harder work digging through the salal but they’re there! Don’t discount the spring though! Thats when Morels are found!

With morels, where we are most successful is just looking on people’s lawns! So anytime you go anywhere, take a quick peek for Morels 😉 They pop up in March/April. At my Moms house, where we’ve found them on the lawn, we spread the cold wood ashes from the wood stove as they help feed the organism.

So, you’re all excited to go now! But still a bit apprehensive. I get it. It’s going outside your comfort zone! It was outside of ours a few years ago! Here are our rules we follow.

1) Get a guide you can bring into the bush with you.

Some identifying factors have to do with where mushrooms are grown. If the book says it grows under firs, but you’re in a forest of arbutus? Than you probably shouldn’t pick it.

The chanterelle, for example, has a look alike in the Jack o’Lantern mushroom. There is one very distinguishable trait that the inside flesh of the stalks is different, but if you didn’t know that, you could pick the wrong mushroom. We’ve personally never found a Jack o’Lantern mushroom, but we’re aware.  An ounce of prevention is worth a pound of cure! 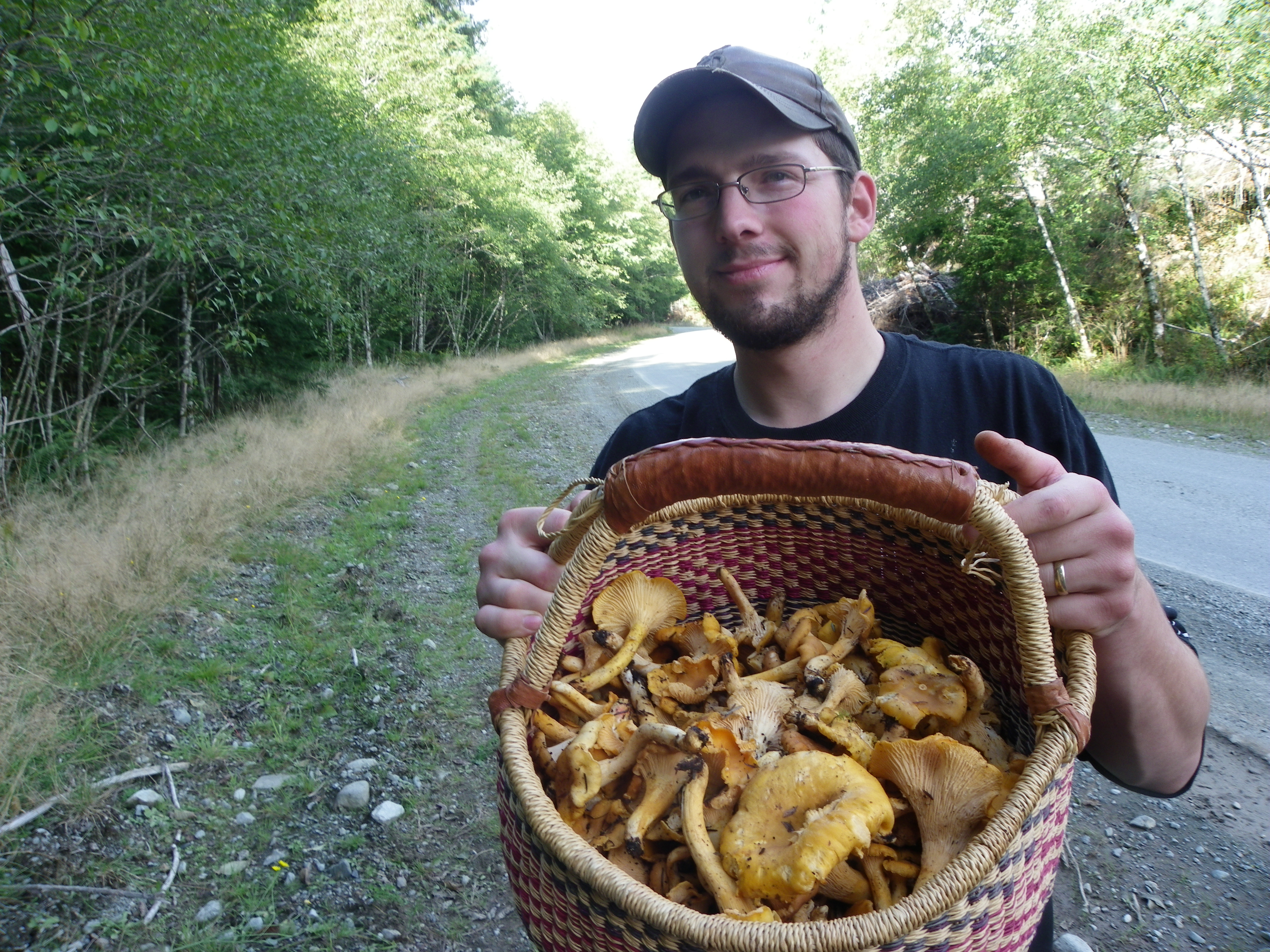 Now of course there will be exceptions, but honestly, this year is the first year we’ve eaten a white mushroom. It’s too hard to mix them up with other white ones, and there is plenty o’ poisonous white mushrooms! Russulas are doing SO well where we are so we did eat them and enjoyed them. We were very careful about identifying them.

4) When reading through important identifying features, have a partner.

One of us holds the book, the other the mushroom. So when I read aloud “Veil absent”, Marius checks for that. It’s double insurance, and makes sure that you don’t skim through. Proper identification is important! Lest you have a partner, still read aloud to yourself. I find you often catch things you wouldn’t when reading in your head.

5) Accept that you may become obsessed.

It’s free food people. How can you pass that up?! And to get that free food? You go for a walk in the woods! Thats like free therapy. Can’t pass that up either. Marius was building tree stands with a friend on their farm, and when they were driving back in the Kubota (some all terrain farm vehicle thingy) he told him to STOP. Well Andrew thought he’d seen a deer. Nope, Marius came back with an armful of lobster mushrooms to a very skeptical Andrew. Moral of the story? You’ll be considered a bit weird, but I’m okay with that.

NOW! Get out there and go look for mushrooms! Before the season is over! 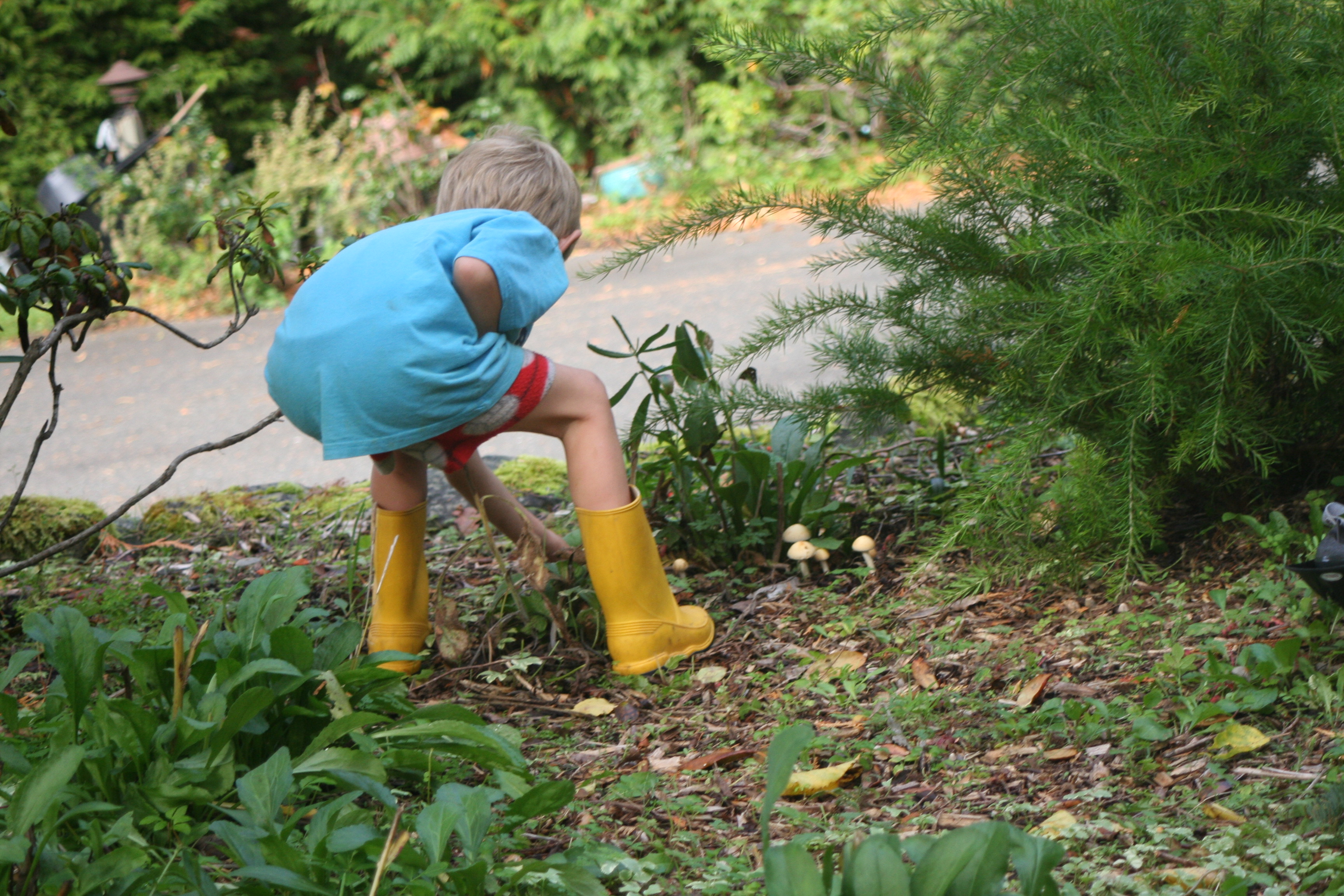