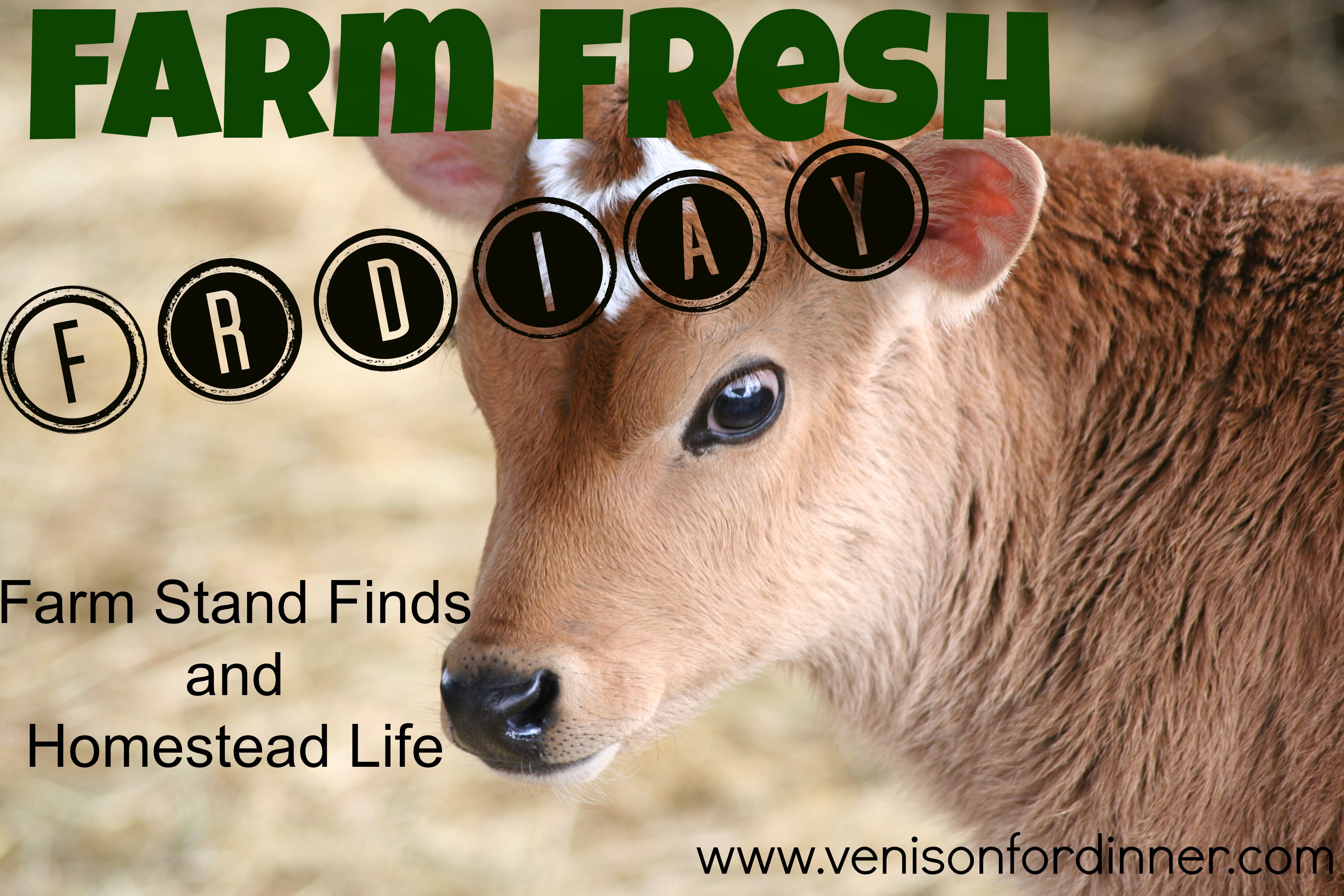 If you follow me on Facebook or Instagram you’ll know that last week we had a new calf! We’ve been eagerly awaiting Wilderness calving and we were ecstatic to find a calf bouncing around one morning! Hurray for easy calvings! 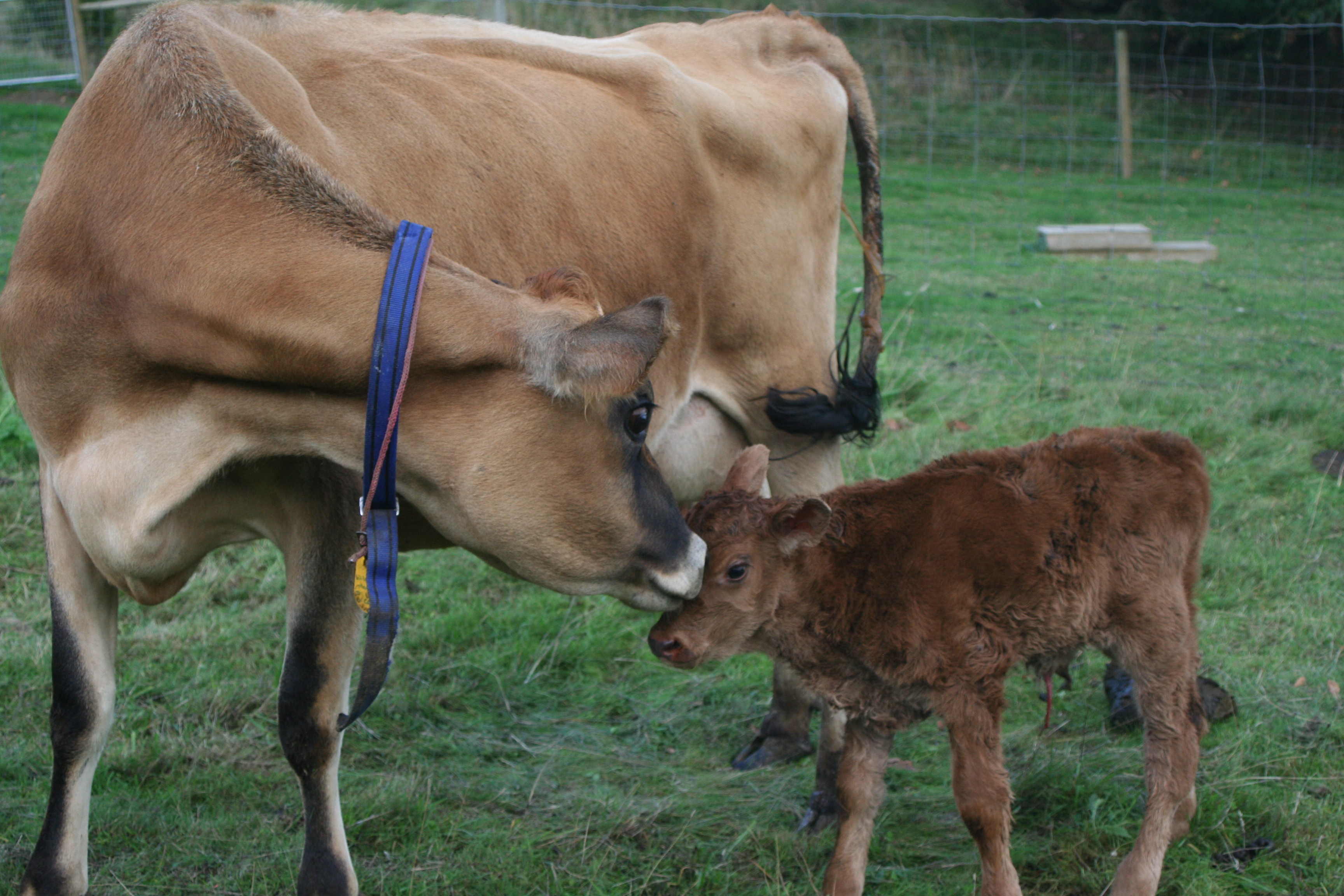 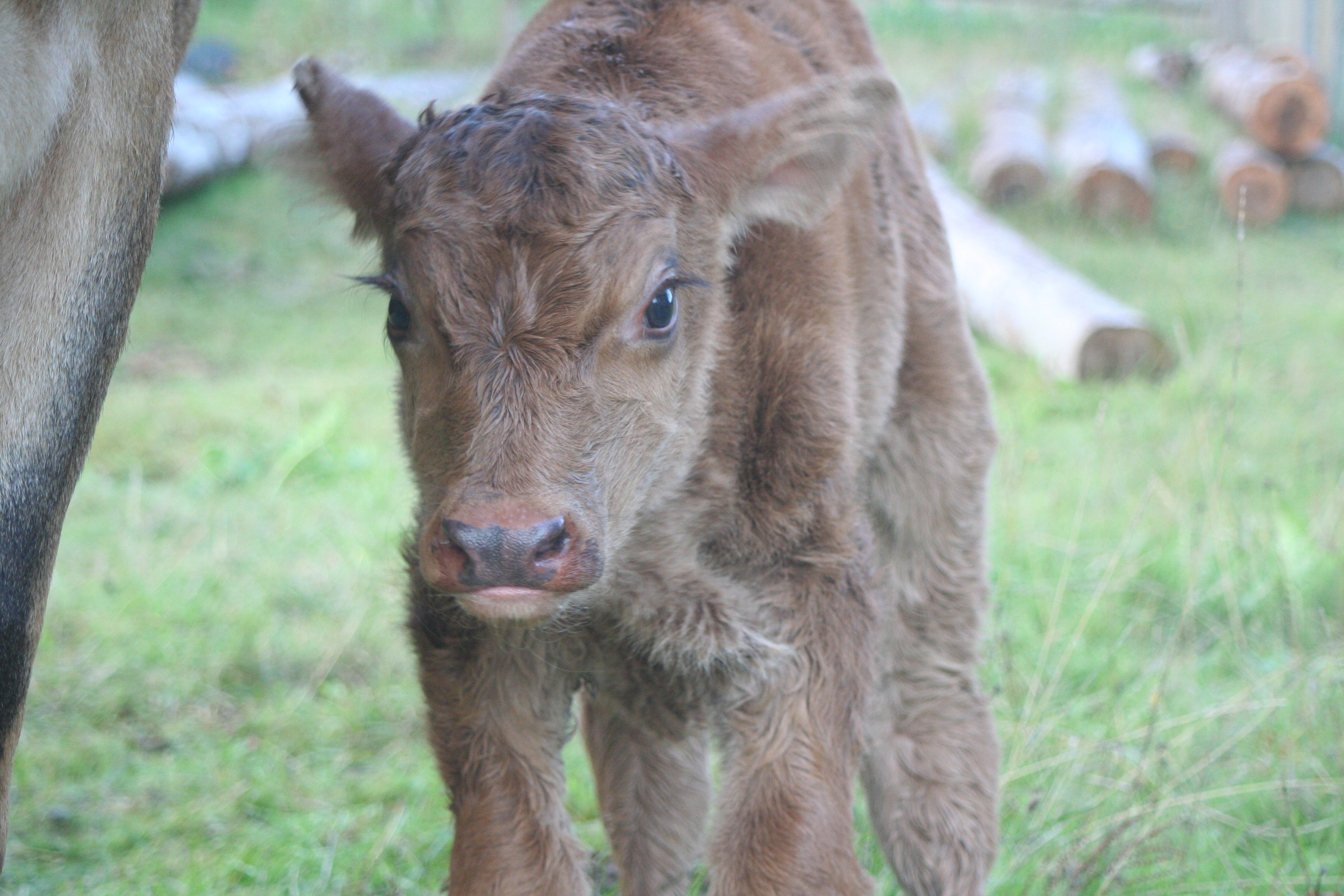 Wilderness was Artifically Inseminated (AI’d) in January and it was an effortless process. Lord knows we needed that after having to eat our last milking cow.  She was bred to a Red Angus as we knew we wouldn’t want a replacement heifer (baby girl calf we would raise for another milking cow) but instead would want a calf we could eat. And let me tell you! This little bull calf is a bruiser! My Mom’s lambs got named after apple varieties this spring (for example; Belle and Boskoop, Wolf and River) so I put it out there on Facebook as to what variety should we name him after? Fuji, Charles Ross, King and many others got suggested! King was my favourite. We call our cows by single syllables more often than not so it would fit. Then Red Delicious, called Red, got suggested. I fell in love! It fit so well! He’s a RED angus cross, who will be DELICIOUS when eaten! Red it is! Wilderness usually gets called Will, so Will and Red rolls off the tongue well. 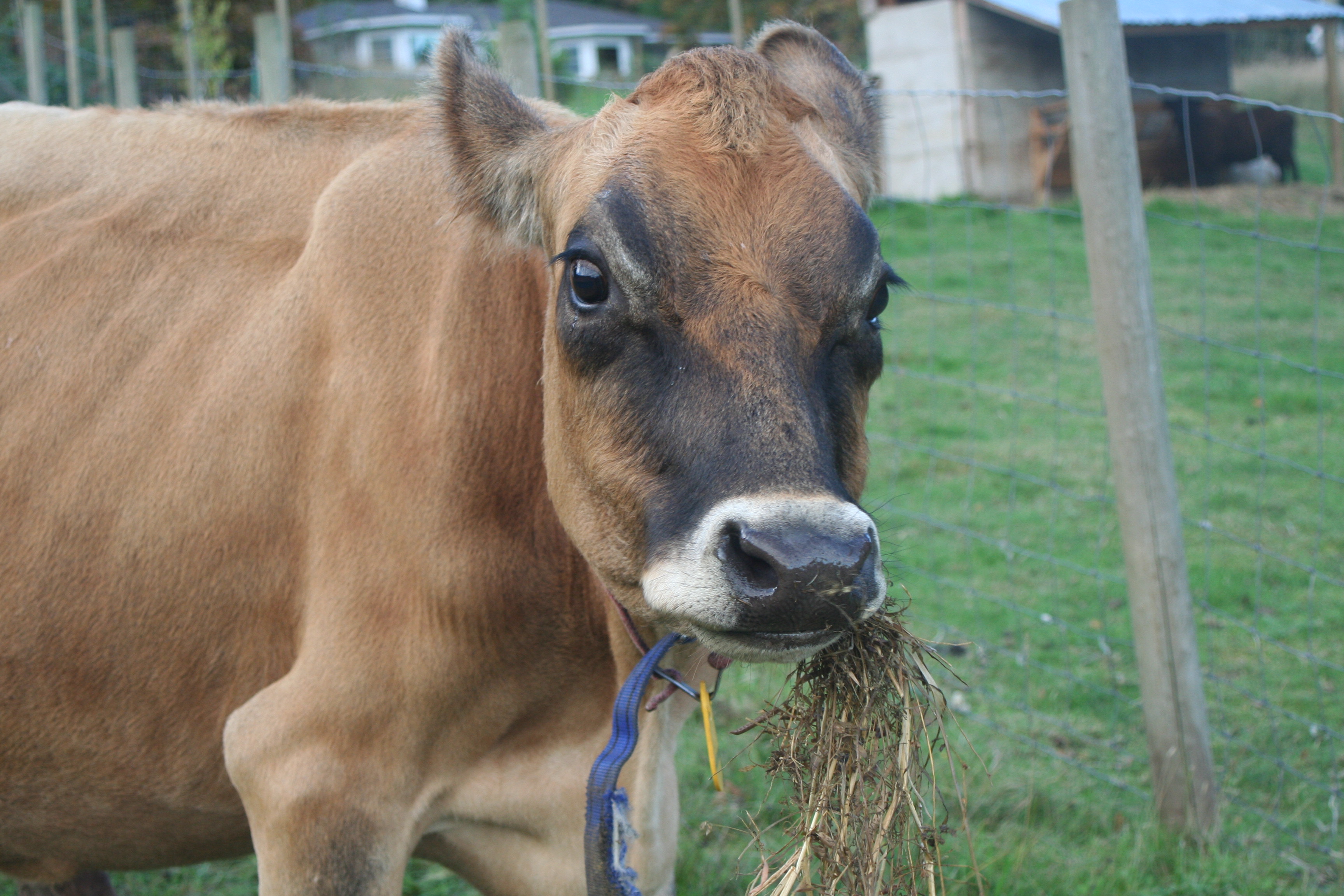 This is just hours after we found her. She was laying down and that worried me because a cow that won’t get up is most likely a cow with milk fever. Animals die from milk fever fast. Basically, their body needs loads of calcium, fast, to produce that lovely colostrum! But it draws on their stores too hard and puts them into this shock that will kill them. If they are walking around and eating then they are usually fine. I had to walk right up to Will and pull on her collar to stand up, but then she started walking around and voraciously ate the haylage I brought over to where she was. (She didn’t want to go over to the shared feeder with the sheep) I sighed with relief, but still wanted to keep a close eye. I did go quickly grab a calcium/magnesium supplement from a local jersey farm that they give as a precaution after birth. It really helps prevent milk fever and $30 life insurance on a $1500 cow? I’ll take it.

Her udder was dripping it was so full, so when Marius got home from work we decided to milk a bit of the pressure off of her. The day before I had put her in a field more visible from my Moms house, but after having her calf, I put her back in with Tilley, our other cow. 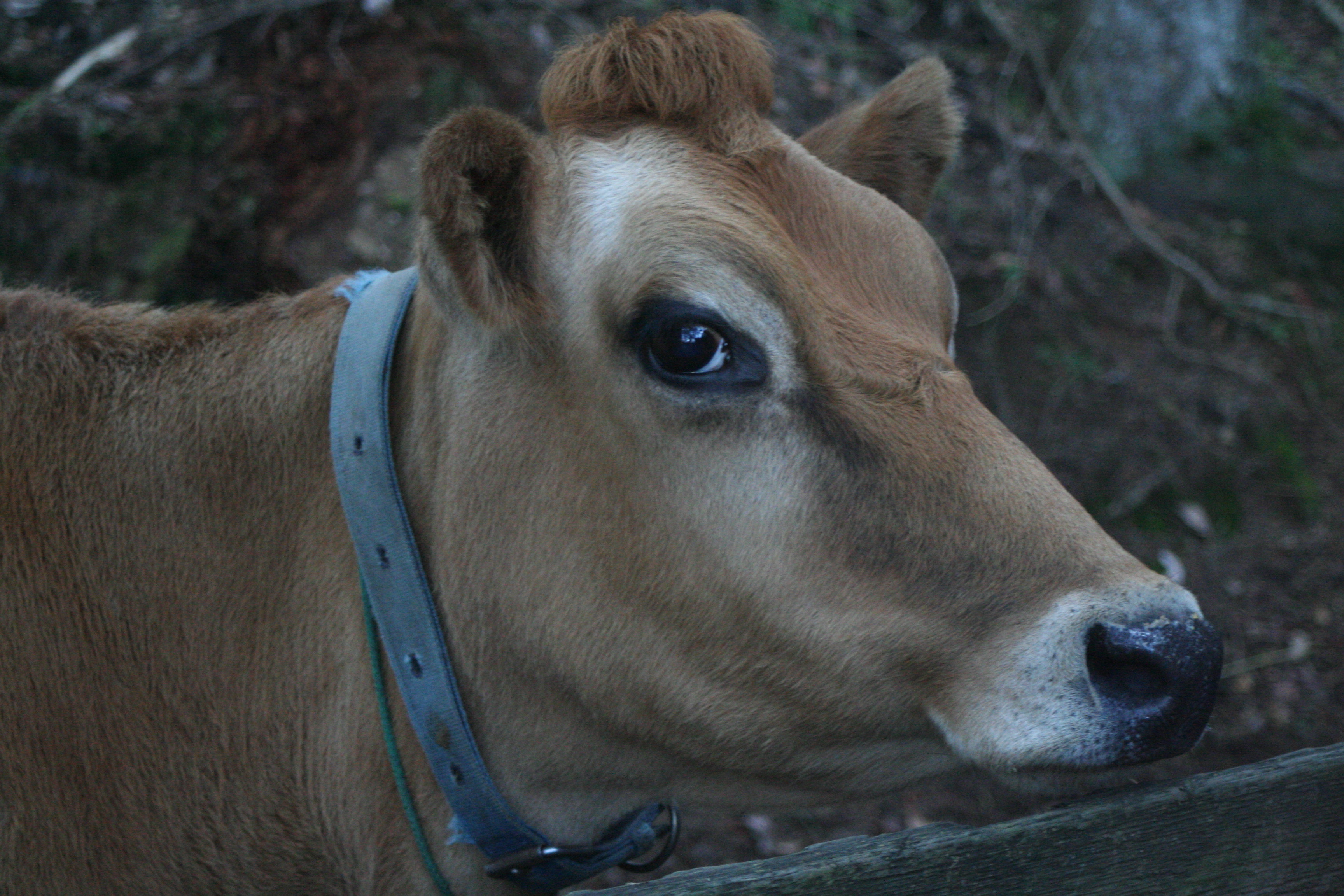 This is Tilley here waiting for Will to come back! We actually just sold Tilley and she went to her new home last Tuesday. It was too much on us and on the land to have two milking cows. I can’t think of a better home as they have 6 kids, the oldest three being girls all very into milking. Tilley is so patient and she will have a terrific life there. It was a sad morning Tuesday milking her for the last time.

Anyways! Back to Will and Red! 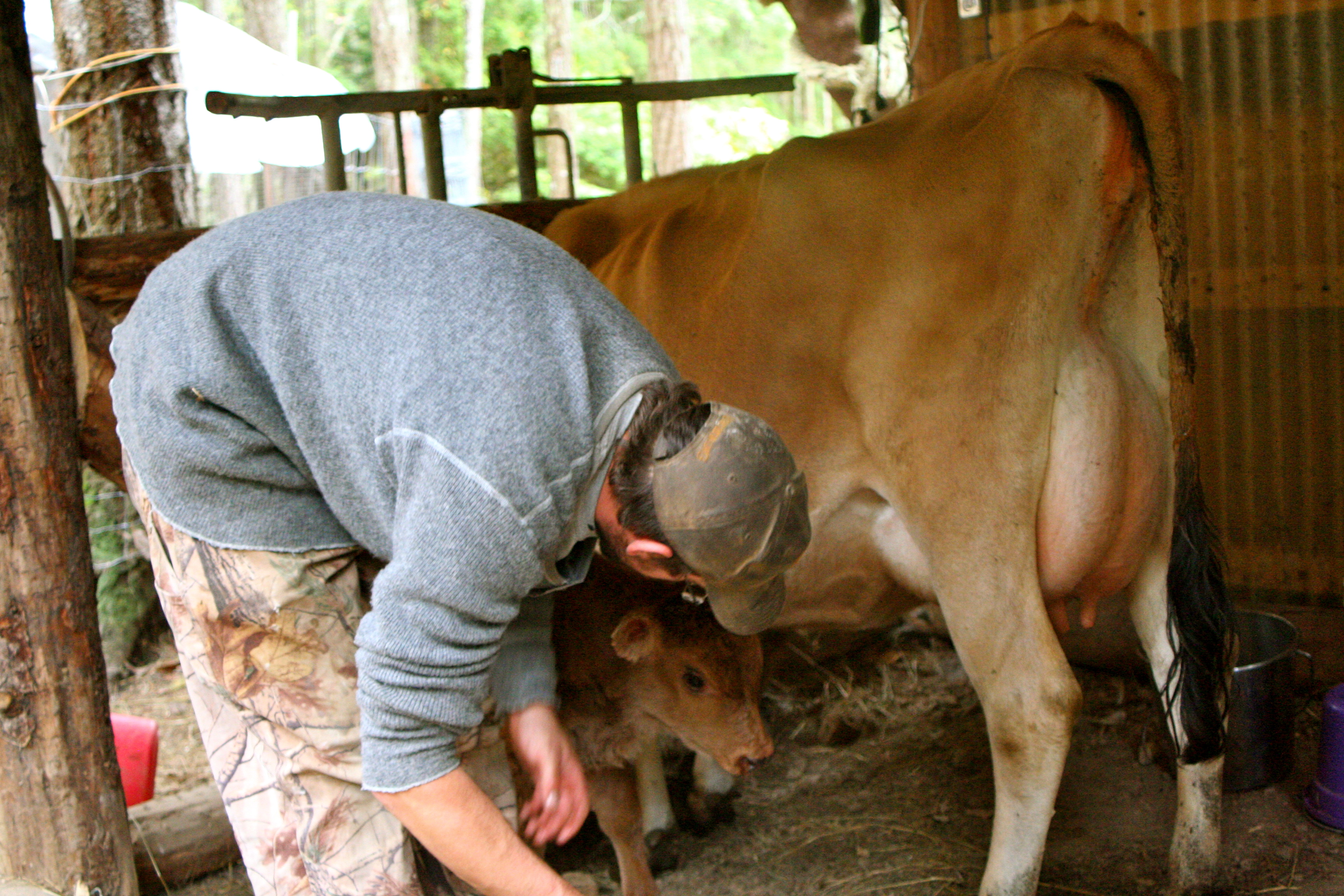 We brought them both into the stanchion, as we didn’t know how Will would react to being separated from Red. She was excited to have grain and be back in the saddle again! As you can see, her udder is quite large and hard out the back of her legs.

The other thing you should notice is that her afterbirth is still hanging there; 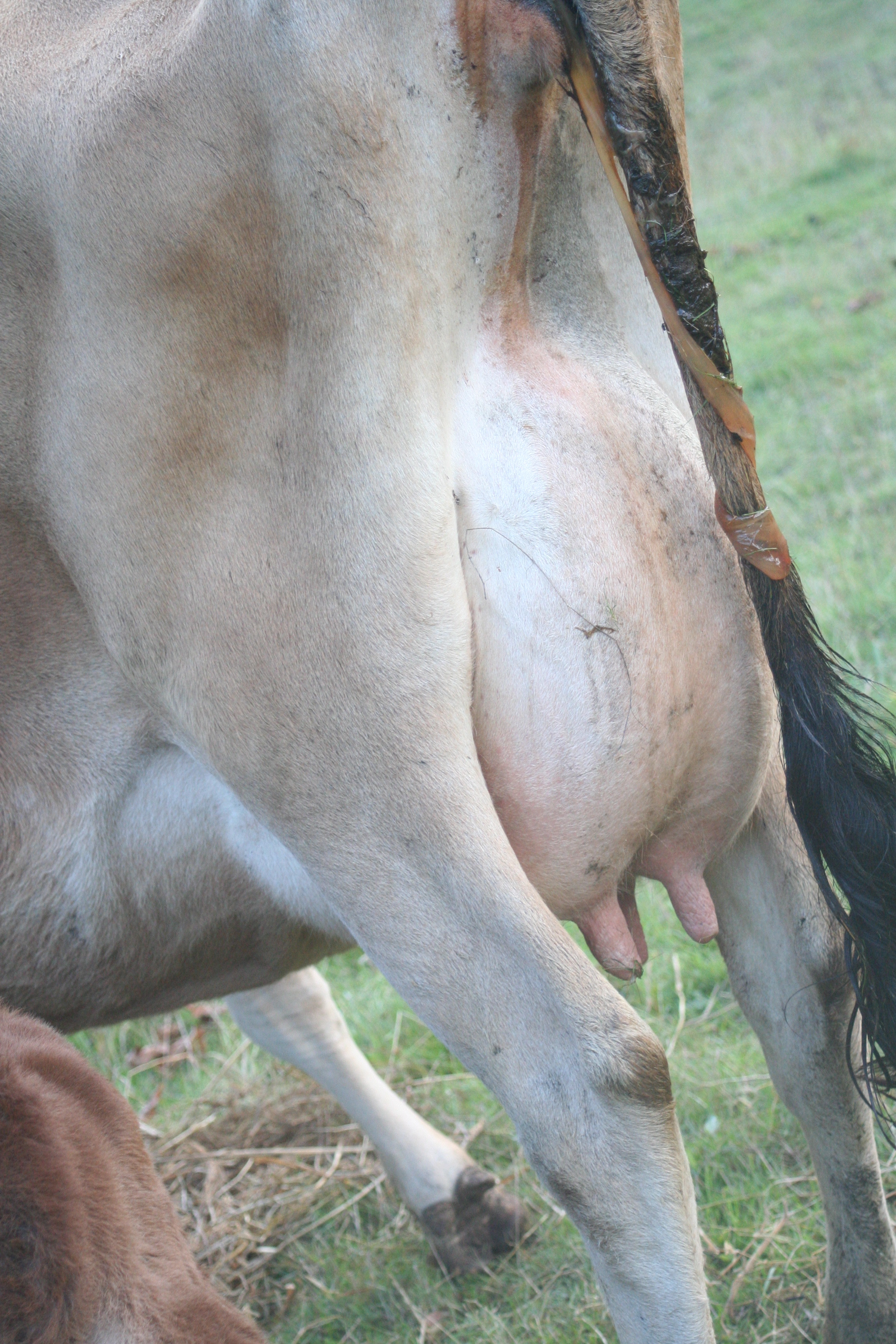 I didn’t know what to think, but Marius was worried (“When you give birth…that all comes out right away…” he said) so I called the vet and they assured me it will go on its on in a couple of days. It’s only gone in humans right away as the doctor helps it along. 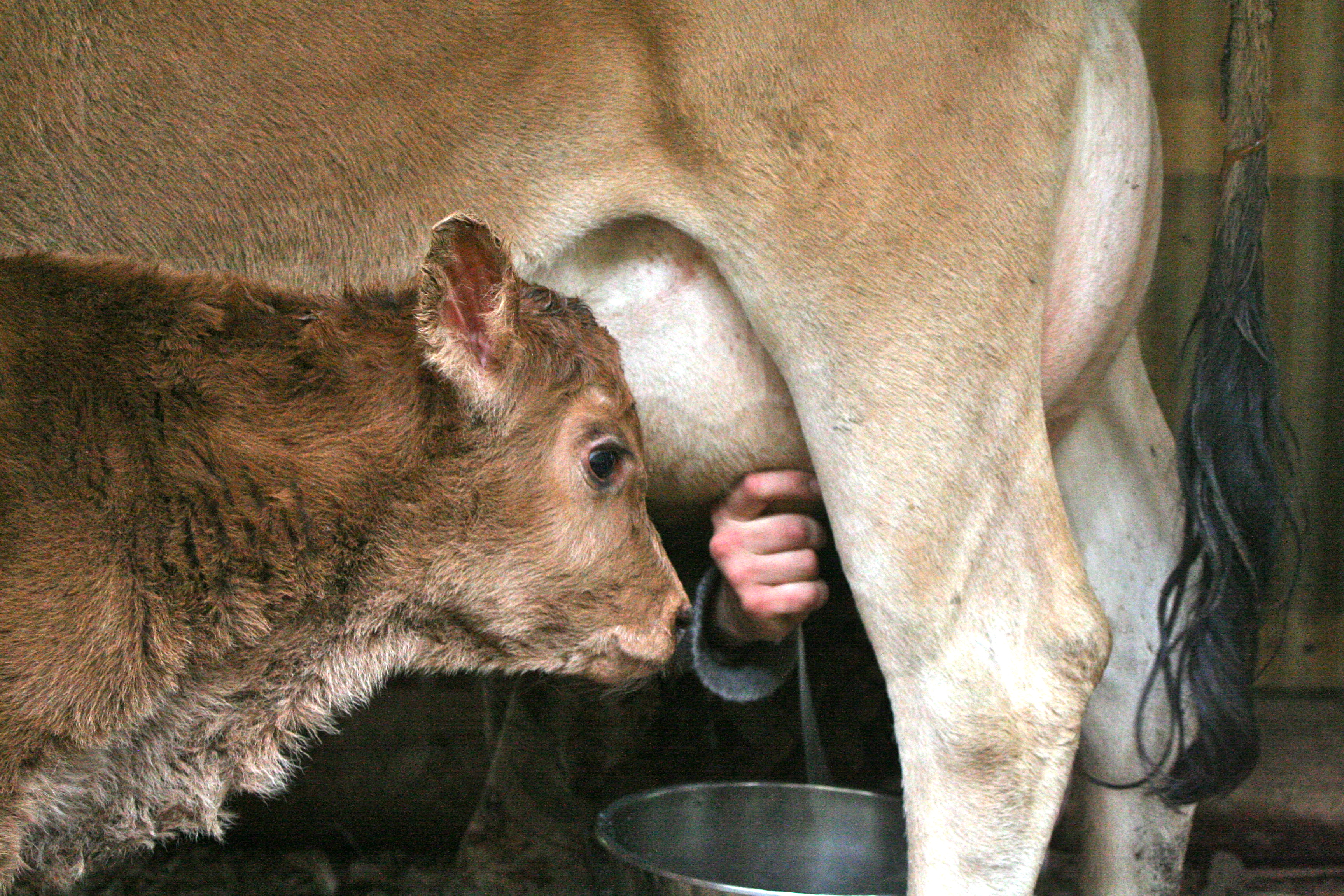 Will was so patient and Red just stood there for us to milk out a litre. It was enough to take some pressure off but still leave loads for Red!

Here is the “CMPK” calcium/magnesium ‘paste’ we gave her. You need a caulking gun to give it to them so I bought one for $5 at the hardware store. Then Mare and stepdad Doug informed me that was a horrible one and got one from Mare’s truck. Oh well! 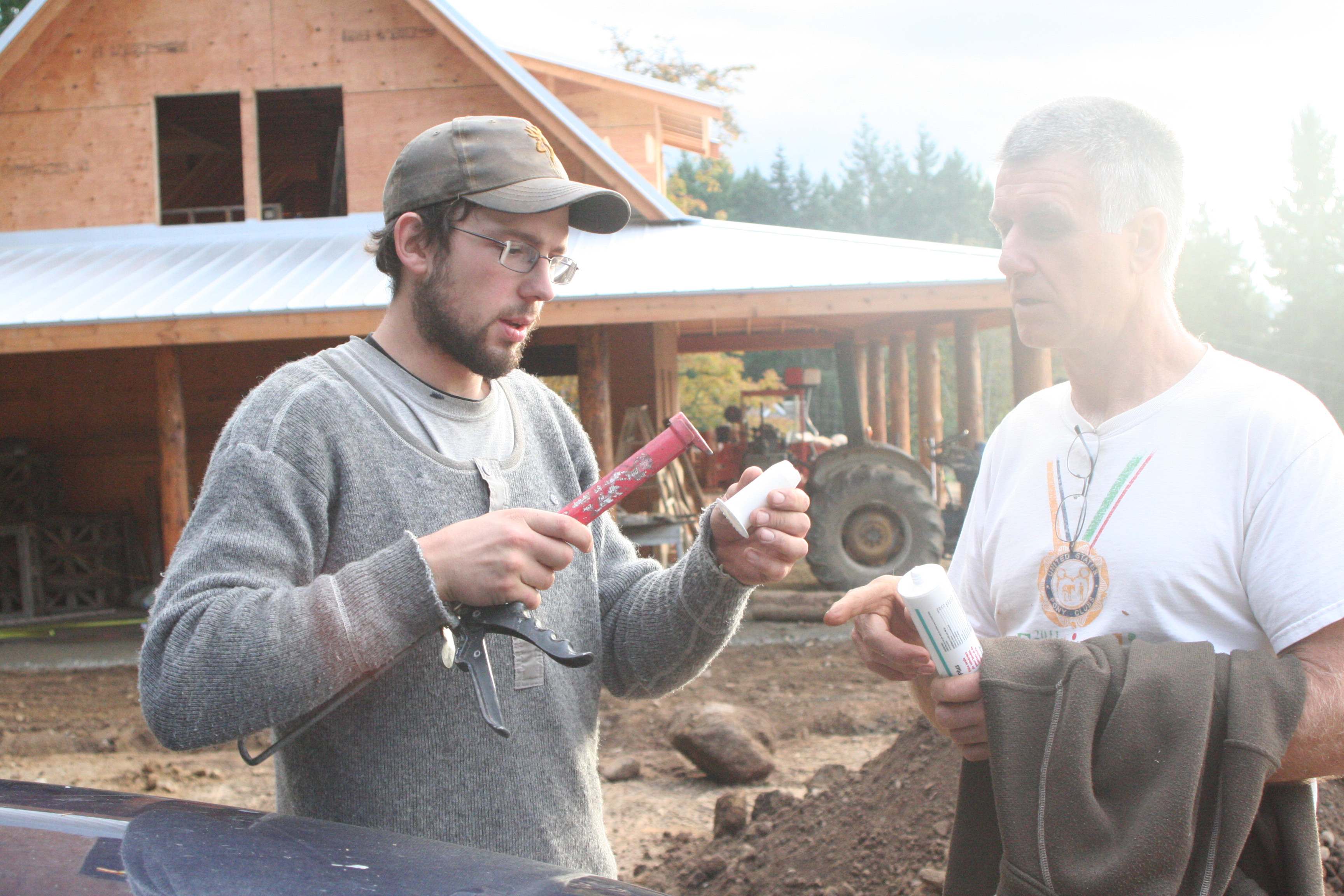 Then! The thing that screws on the end of the tube? Wouldn’t fit in the thingy of the caulking gun. Here they were problem solving…then… 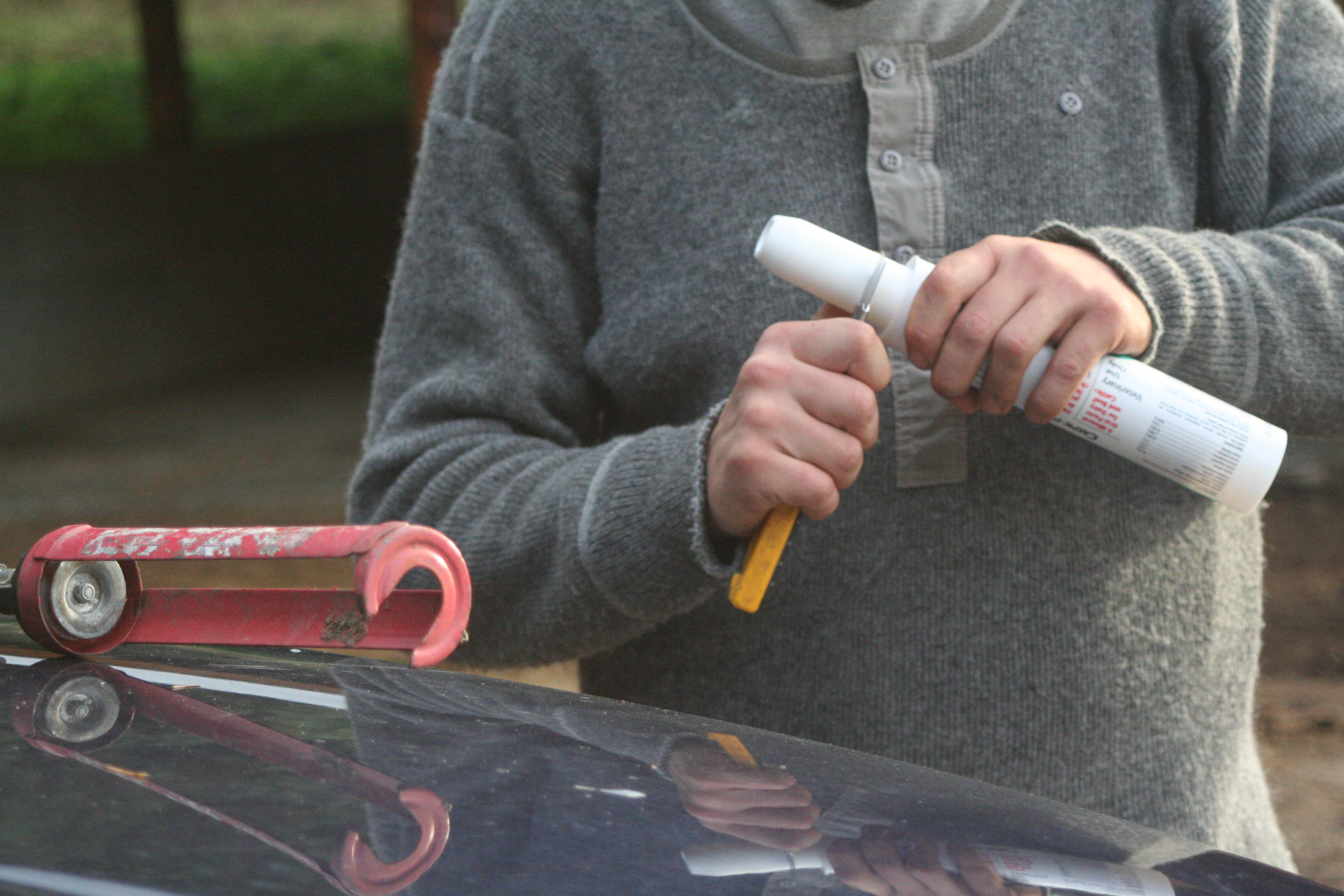 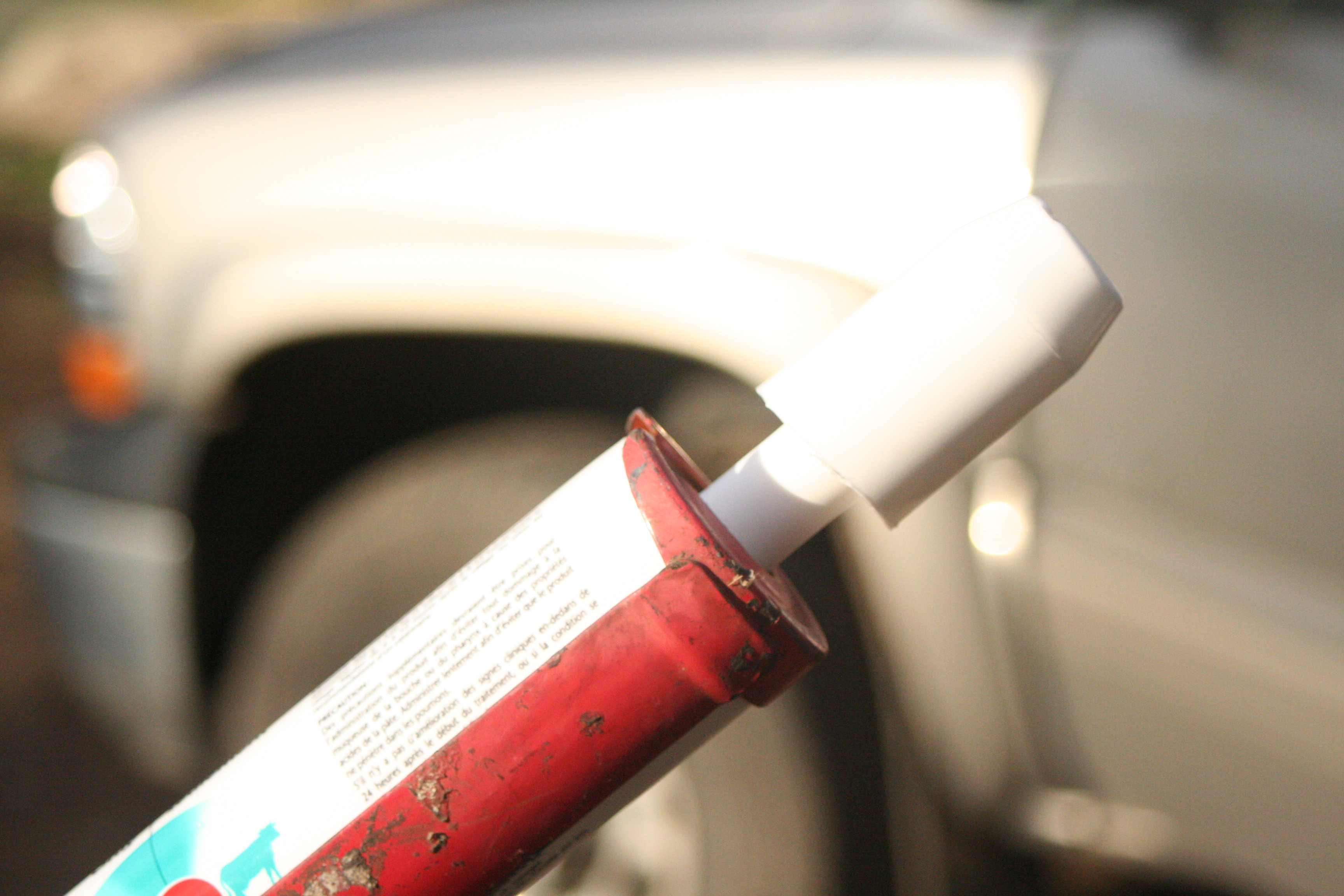 Ta-da! They said it was hard to get in her mouth, but once they did she quite liked it. Our cows are very tame and used to being handled, so I couldn’t tell you what it would be like on a cow not like that…You’d probably want them in the stanchion or a chute with headlock.

Overall, it’s been a good week for Red! We have only milked Will a few times, but (I’m writing this Tuesday, take the time to write when you can!) we plan on starting to separate them for the night and milk in the morning pretty soon. We keep our cows at my Moms house, so while we’re very lucky to have a place for them there, I wish I could just watch Red more!